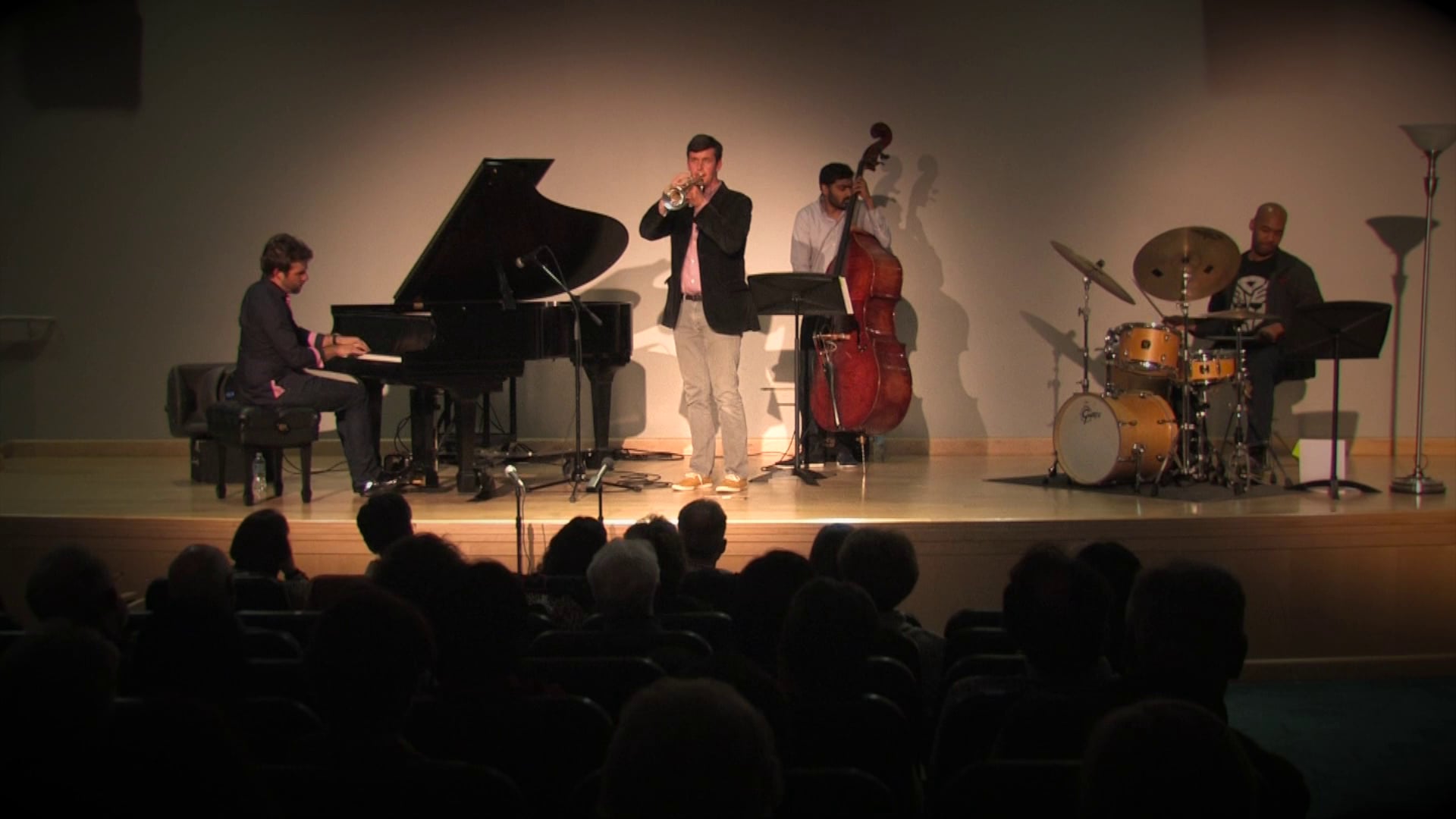 Join us for the return of the in-person series, in our beautiful Rothschild Performing Arts Center, which opened in 2018. For more information about Harker or the Harker Concert Series, contact communications@harker.org.

We’re proud to highlight current and rising musical talent, most of whom also conduct master classes with our students. The evenings begin at 6 p.m. with complimentary hors d'oeuvres and beverages (outdoors), as well as a cash bar for beer and wine. The shows begin at 7 p.m. The Harker Concert Series launched in 2010-11 as part of the school's ongoing commitment to share thoughtful, entertaining and engaging events with the greater Bay Area community. 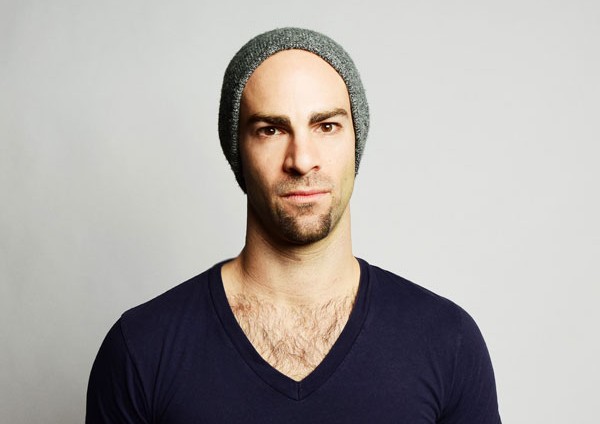 Grammy-Award winning drummer, composer and bandleader Jared Schonig has toured and/or recorded internationally with Nicholas Payton, Dr. Lonnie Smith, Donny McCaslin, Darcy James Argue and Secret Society, The 8-Bit Big Band, Miho Hazama and m_Unit and Ernie Watts, among others. A favorite among vocalists, Schonig has toured with Grammy Award-winners Kurt Elling, The New York Voices, Kristen Chenoweth, Cynthia Erivo and singer/songwriter Donna Lewis. He has performed around the world from Carnegie Hall to festivals in Zimbabwe. Schonig co-led The Wee Trio, which released five albums, garnering praise from respected publications such as Downbeat and All About Jazz. He recorded two solo albums of original music to be released in fall 2021. He recently held the drum chair for the critically acclaimed Tony, Grammy and Emmy-award winning Broadway revival of “The Color Purple” and is currently playing drums and percussion for “Moulin Rouge! The Musical.” 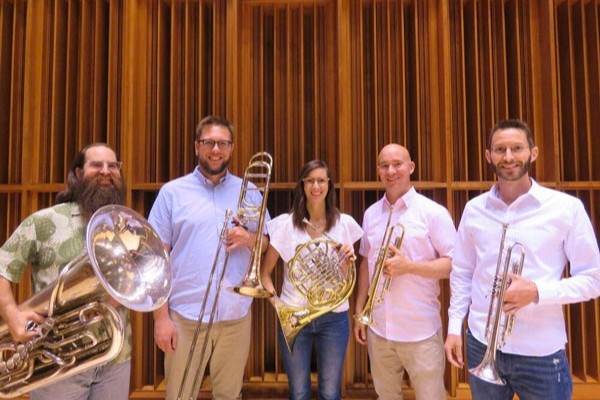 Since forming in 2006, the Emerald Brass Quintet (EBQ) has gained recognition as a dynamic and virtuosic collection of performers and educators. They recently released their debut album, “Danzón,” on Albany Records. Established by graduate student colleagues at the Eastman School of Music in Rochester, EBQ has performed with the world-renowned Canadian Brass and Eastman Wind Ensemble and presented clinics across the country. EBQ was a featured guest on the Gualala Arts Center Concert Series and WXXI 91.5’s "Backstage Pass" and was featured at the 2009 Brass in Frankenwald festival in Hof, Germany. Members of the EBQ are current faculty members at Utah State University, Ball State University, University of Hawaii, Santa Clara University and East Tennessee State University. As individuals, they have performed from the concert halls of Thailand and southeast Asia to Carnegie Hall and Jazz at Lincoln Center's Allen Room, and with orchestras in Cincinnati, Jacksonville, Madison, Honolulu, Rochester, Syracuse and San Jose. 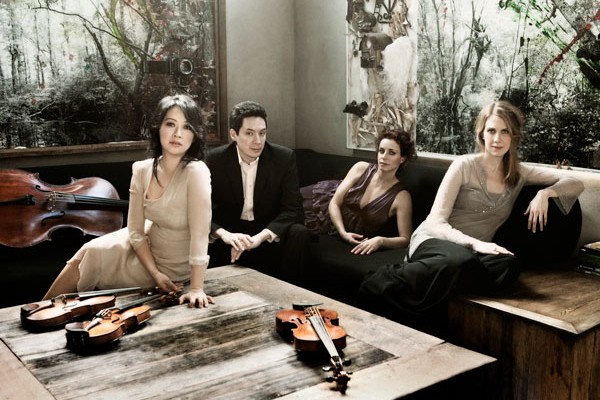 Praised by The New Yorker as “a fresh and vital young participant in what is a golden age of American string quartets,” the Daedalus Quartet has established itself as a leader among the new generation of string ensembles. Since winning the top prize in the Banff International String Quartet Competition in 2001, the Daedalus Quartet has impressed critics and listeners alike with the security, technical finish, interpretive unity and sheer gusto of its performances. The New York Times has praised the Daedalus Quartet’s “insightful and vibrant” Haydn, the “impressive intensity” of their Beethoven, their “luminous” Berg, and the “riveting focus” of their Dutilleux. Since its founding, the Daedalus Quartet has performed in many of the world’s leading musical venues, including Carnegie Hall, Lincoln Center, the Library of Congress, the Corcoran Gallery in Washington, D.C., Boston’s Gardner Museum, the Musikverein in Vienna, the Mozarteum in Salzburg, the Concertgebouw in Amsterdam, the Cité de la Musique in Paris, and in leading venues in Japan. 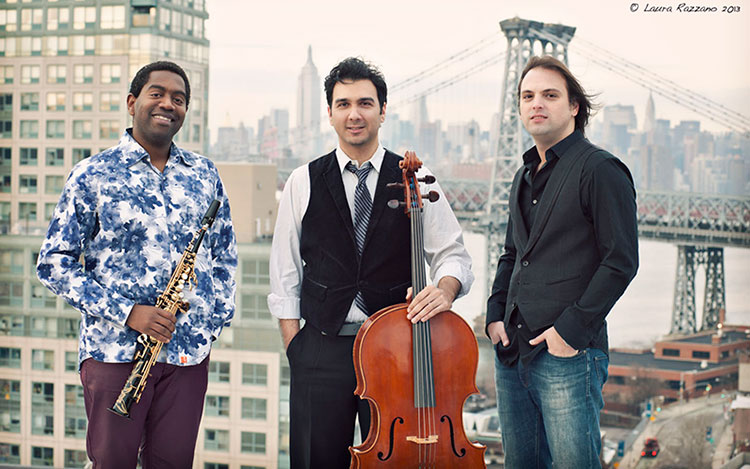 Since their formation in 2013, New York’s Bohemian Trio has made a career of weaving far-flung sounds into a fascinating tapestry that the “Wall Street Journal” hailed as “the sweet spot sought by many contemporary composers, especially in New York, grounded more in creativity than genre.” The members of this unique piano-sax-cello combo each have many awards and recognitions to their name, including a Grammy nomination and honors from several international competitions. 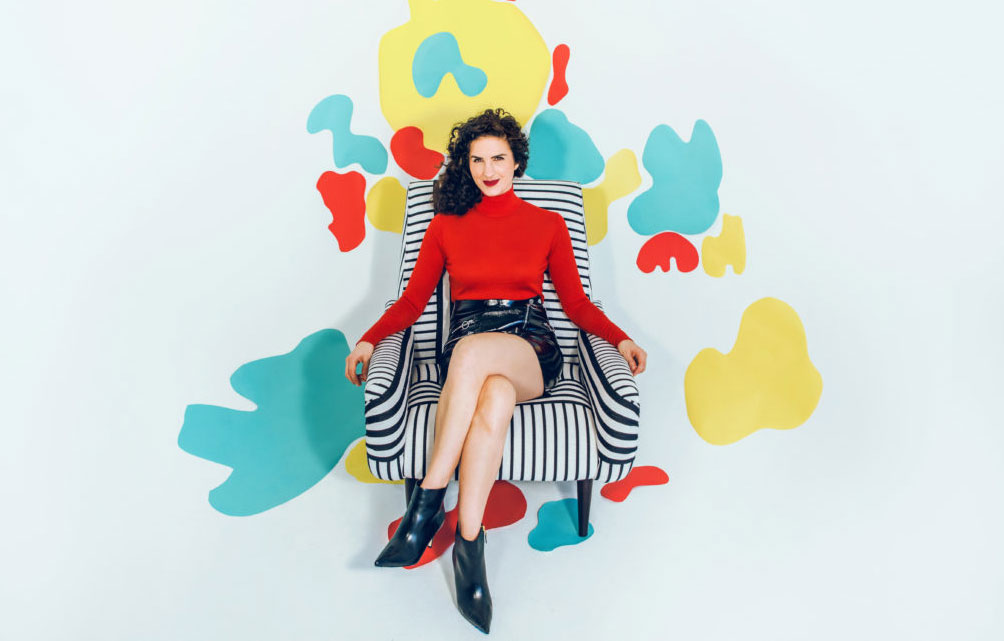 Over a career spanning nearly 20 years, Vancouver-born Laila Biali has established herself as one of jazz’s brightest vocal talents, confirmed earlier this year when her 2018 self-titled album received the JUNO award for “Vocal Jazz Album of the Year.” Her work has also been praised by DownBeat magazine, who named her 2011 album “Live in Concert” one of that year’s best albums. As a vocalist, she has toured with Chris Botti, Suzanne Vega, Paula Cole and Sting, and in 2017 was invited to host CBC Music’s “Saturday Night Jazz” radio show. 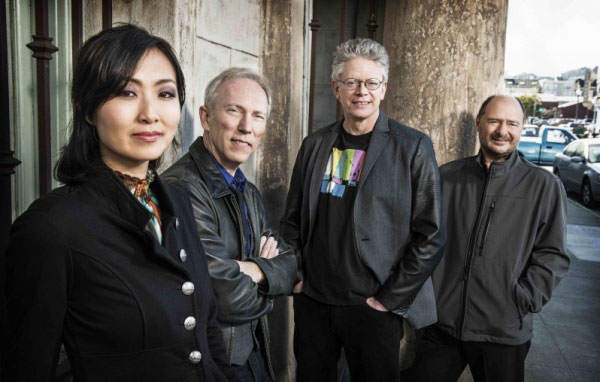 With more than 4 1/2 decades of innovative, diverse and experimental works to their credit, the San Francisco-based Kronos Quartet is one of the most recognized names in contemporary classical music. Kronos’ adventurous spirit has resulted in brilliant interpretations of Jimi Hendrix and Sigur Rós, and their long history of high-profile collaborations reads as a who’s who of legendary artists, including Laurie Anderson, Philip Glass, Rhiannon Giddens and Wu Man, to name but a few. The recently recorded a collaboration with celebrated minimalist composer Terry Riley. 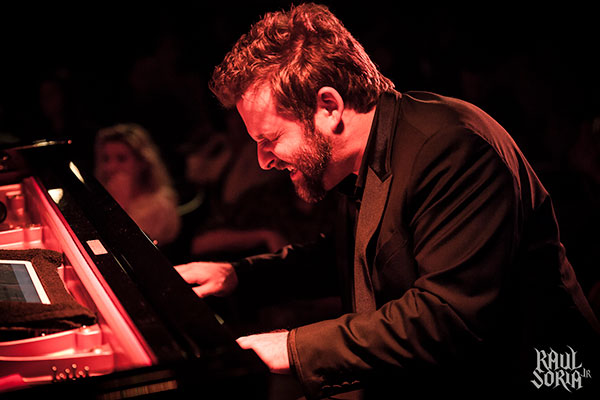 Taylor Eigsti has appeared four times at the HCS, as well as in a live chat during our 20-21 virtual season. The Menlo Park native and New York-based Eigsti started playing the piano when he was four and was quickly labeled a prodigy. He has since released seven albums as a bandleader and appeared on over 50 albums as a sideman. Eigsti has garnered multiple individual Grammy Award nominations for his work as a recording artist and composer, including Best Instrumental Composition and Best Jazz Instrumental Solo. He co-wrote a featured composition with Don Cheadle for the 2017 Grammy-winning soundtrack to the motion picture “Miles Ahead,” and composed the theme music to the motion picture "Detachment" (2011) starring Oscar-winner Adrien Brody, collaborating on the score with The Newton Brothers. Eigsti has been featured numerous times in various television specials, NPR appearances and commercials, and this was featured on a television special with Chris Botti for PBS’s “Great Performances.” 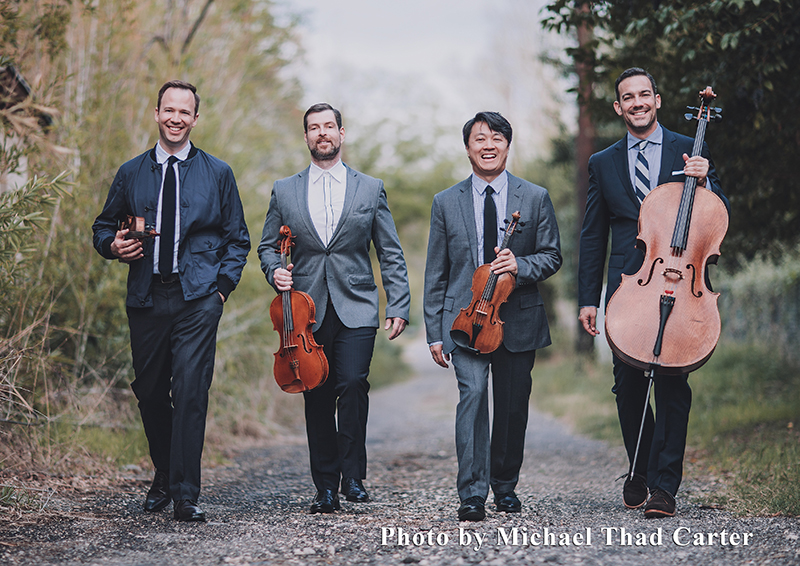 The Miró Quartet is one of the world’s most celebrated and dedicated string quartets, having been labeled by The New Yorker as “furiously committed” and noted by the Cleveland Plain Dealer for their “exceptional tonal focus and interpretive intensity.” They have appeared twice at the HCS. Based in Austin, Texas, and thriving on the area’s storied music scene, the Miró takes pride in finding new ways to communicate with audiences of all backgrounds while honoring the longstanding tradition of chamber music. Formed in 1995, the Miró Quartet was awarded first prize at several national and international competitions, including the Banff International String Quartet Competition and the Naumburg Chamber Music Competition. Since 2003 the Miró has served as the Faculty Quartet-in-Residence at the University of Texas at Austin’s Sarah and Ernest Butler School of Music. 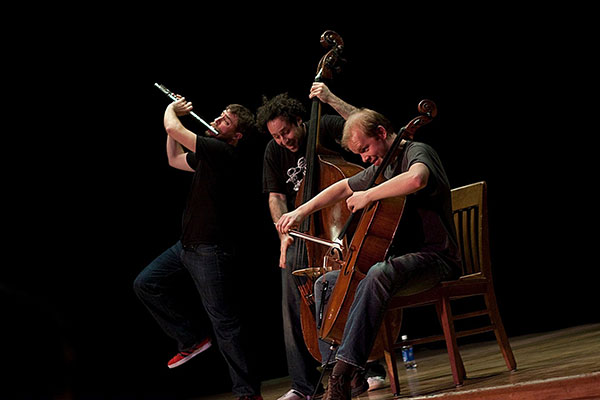 PROJECT Trio has appeared twice at the HCS. The Trio was forged out of a collective desire to draw new and diverse audiences by performing high energy, top quality music. Using social media to broaden their reach beyond the concert stage and classroom, the Trio has its own YouTube channel, which has over 88 million views and 112,600 subscribers, making PROJECT Trio one of the most watched instrumental ensembles on the internet. Combining the virtuosity of world-class artists with the energy of rock stars, PROJECT Trio is breaking down traditional ideas of chamber music. The New York Times has called beatboxing flutist Greg Pattillo “the best in the world at what he does.” The genre-defying Trio is acclaimed by the press as “packed with musicianship, joy and surprise” and “exciting a new generation of listeners about the joys of classical and jazz music.”

The trio participated in our special virtual 20-21 season, chatting live with attendees before rebroadcasting its previous HCS appearance. 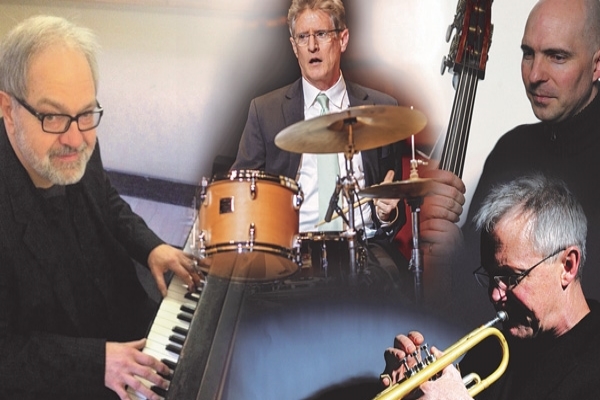 Coming together for a rare West Coast appearance, the Eastman Jazz Quartet featured four experienced and respected instructors from the University of Rochester’s Eastman School of Music: pianist Harold Danko, trumpeter Clay Jenkins, bassist Jeff Campbell and drummer Rich Thompson. The members’ performance backgrounds include stints with legends such as Chet Baker, Tito Puente, James Williams, Buddy Rich and the Count Basie Orchestra. In addition to their work as performers and educators, quartet members have appeared on acclaimed recordings such as “Chet Baker in Tokyo,” “CrossWeave” by the Kim Richmond/Clay Jenkins Ensemble and “Stop-Start” by Trio East, a group featuring three of the quartet’s members. 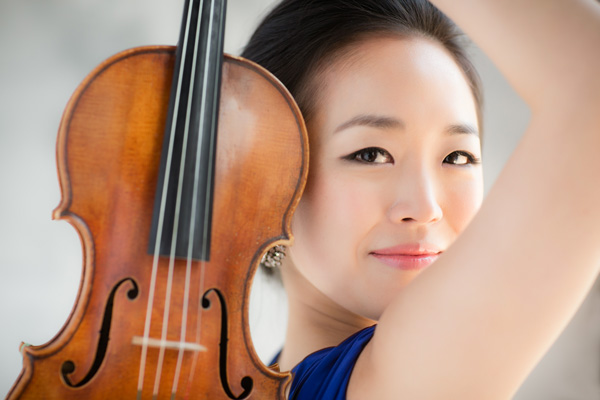 Violinist Jessica Lee, who picked up the instrument at just 3 years old, garnered national attention in her youth after being featured in LIFE magazine. Since then, she has become far more than a one-off sensation, performing extensively worldwide and developing a reputation as a top-flight soloist, chamber musician and orchestra member. Among her many career highlights are her European solo debut at the Rudolfinum in Prague and her solo performance with the Malaysia Festival Orchestra at the Sultan of Malaysia’s birthday gala. In 2006, she performed as a member of the Johannes String Quartet, who joined the Guarneri Quartet on their farewell tour. Her many orchestral performances include appearances with the Minot Symphony Orchestra, Long Bay Symphony, Stamford Symphony and Modesto Symphony. 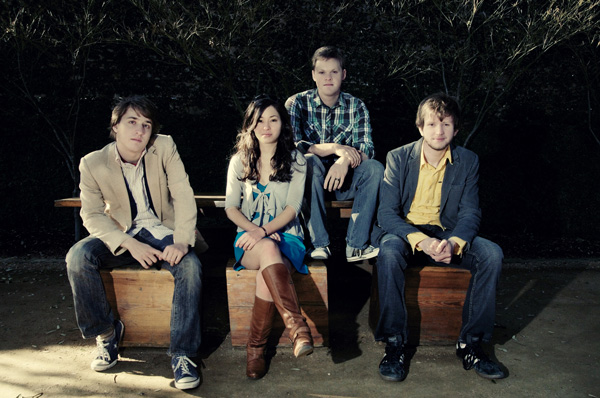 Formed in 2008 at the Cleveland Institute of Music and now based in New York City, the Aeolus Quartet has earned numerous accolades for its fluid performances and sense of adventure. Grand prize winners of the 2011 Plowman Chamber Music Competition and 2011 Chamber Music Yellow Springs Competition, Aeolus has studied with elite groups such as the Guarneri Quartet, St. Lawrence Quartet and Juilliard Quartet. Their extensive touring experience has taken them to Carnegie Hall, the Library of Congress, London’s St. Martin-in-the-Fields and the Shanghai Oriental Art Center. After receiving a Residency Partnership Grant from Chamber Music America, Aeolus spent much of its 2015-16 season involved with outreach efforts and performances at Duke Ellington School for the Arts, the Sitar Arts Center and George Washington University. With their recent residency at the Royal Conservatory of Music in Toronto, Afiara has enjoyed a career as one of classical music's most revered young quartets, winning the Young Canadian Musicians Award, the Concert Artist Guild International Competition, top honors at the Banff International String Quartet Competition and more. Their pedigree as musicians has led to performances at top venues including Carnegie Hall, London's Wigmore Hall and the Museum of Modern Art in Sao Paulo, Brazil. This concert featured an octet with Harker's own string quartet joining Afiara on stage, the culmination of Afiara's three-day residency with the school. The Respect Sextet formed in 2001 and has since garnered much critical acclaim for its improvisational, freeform stylings that are an amalgam of many different genres. The New York Times described the group thus: “The Respect Sextet stamps ambitious music with a smart-alecky affect, ranging broadly from the antic to the deadpan." Playing traditional instruments as well as toys, the group is one in which, as they describe it, "the serious, heady, and intellectual mingle with the light, comic, and absurd." With the famous 1715 Lipinski Stradivarius